May 01, 2022
Brian hit a home run this week with the group of guys he is working with to create an "entrance" to GBBC.  Check this out! 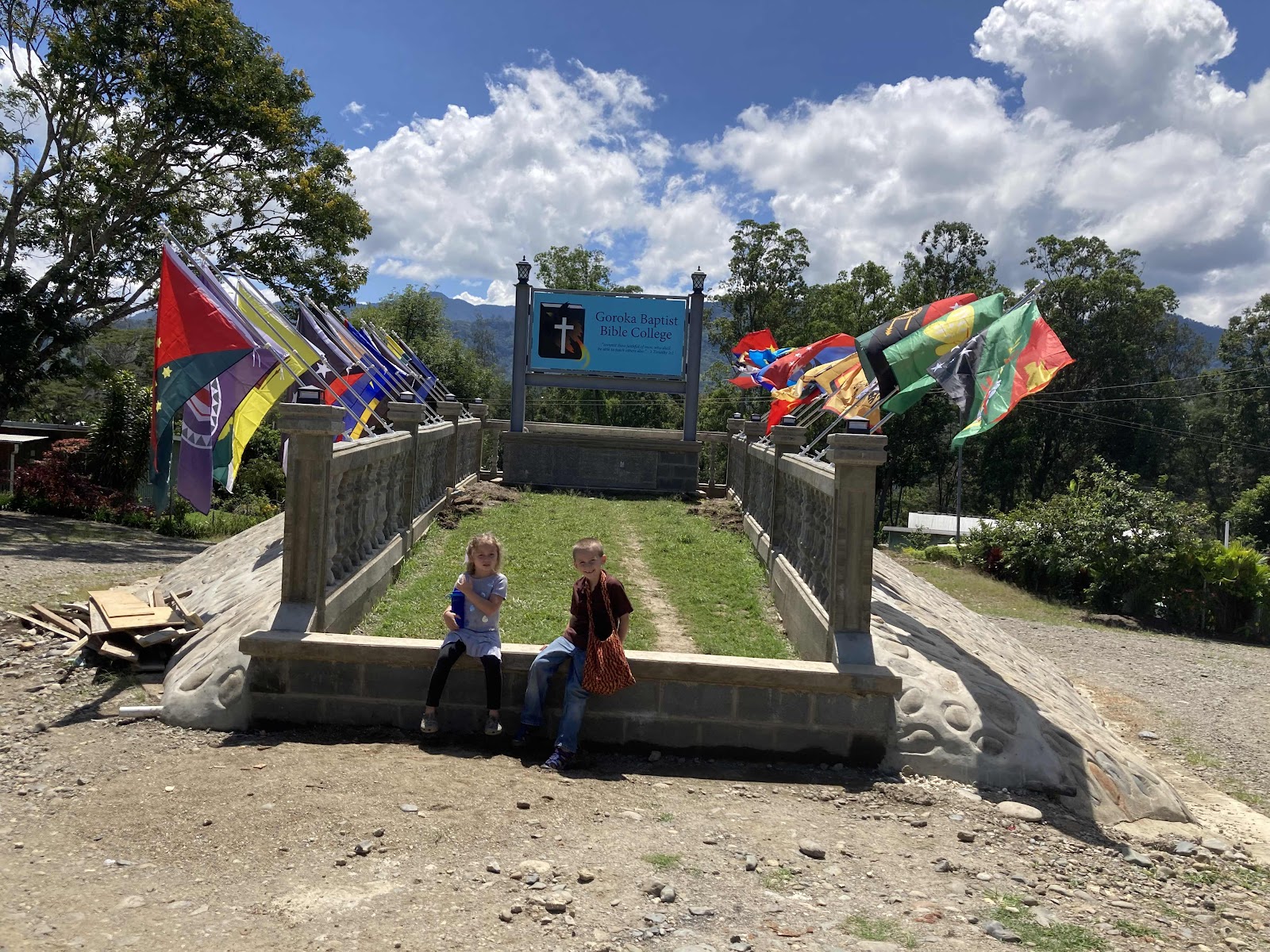 Gunner and Moriah striking a pose…. 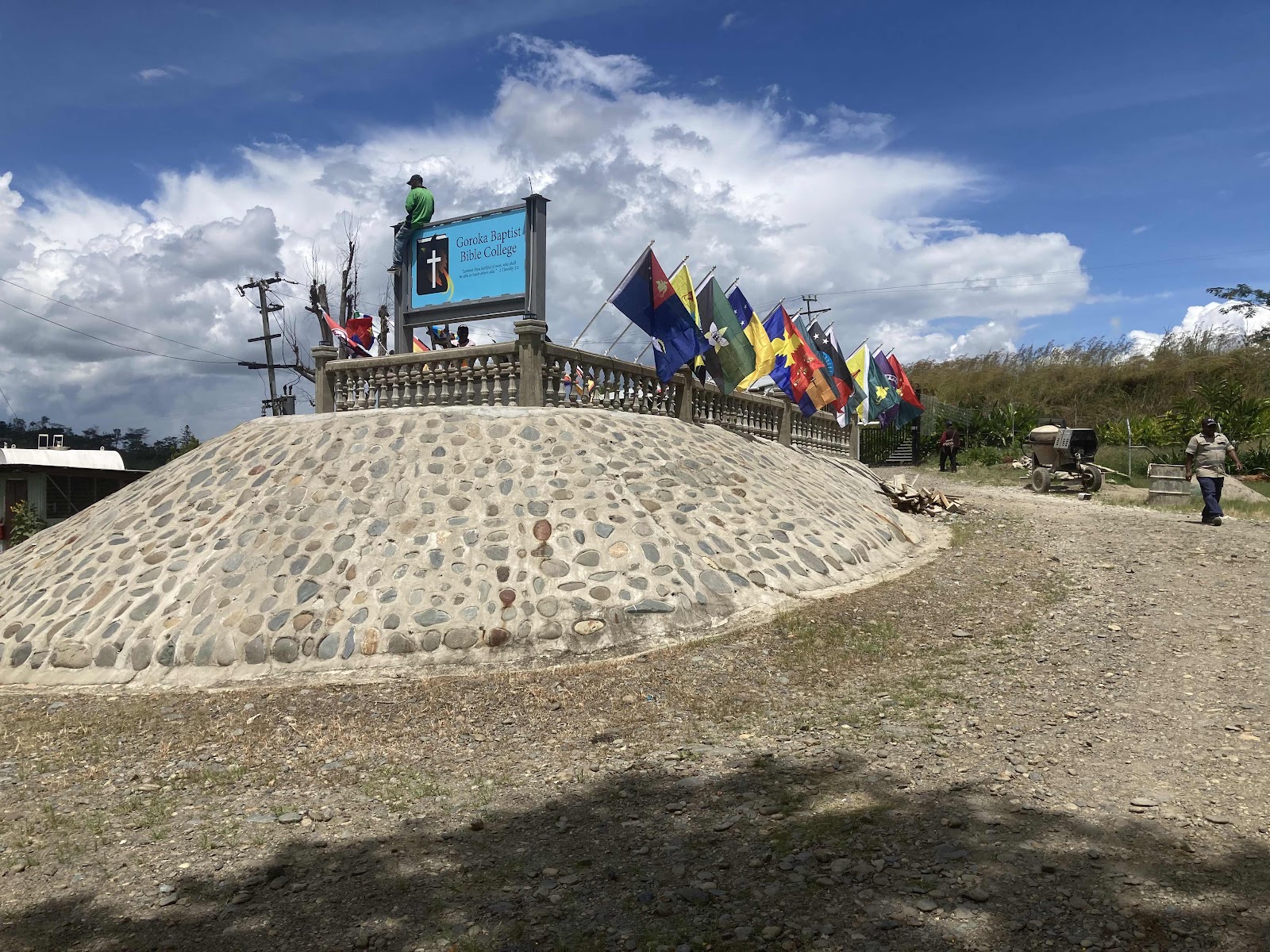 Finishing the electrical on the back side….
The flags are the twenty two provinces of Papua New Guinea.  The sign is to testify to the establishment of the Goroka Baptist Bible College, but ultimately?  The whole project is to the glory of God!  The "hill" that the flags and sign rest upon is known as "Mount Moriah."  It has been no small feat for the guys to build and transform what used to be a nice mound of dirt and create a masterpiece that testifies to our Creator God who redeems life from the dust of  the ground!
Gunner also hit a big milestone….we now have a seven-year-old in the house!  Can you see a glimpse of his excitement in his face while he was opening gifts? 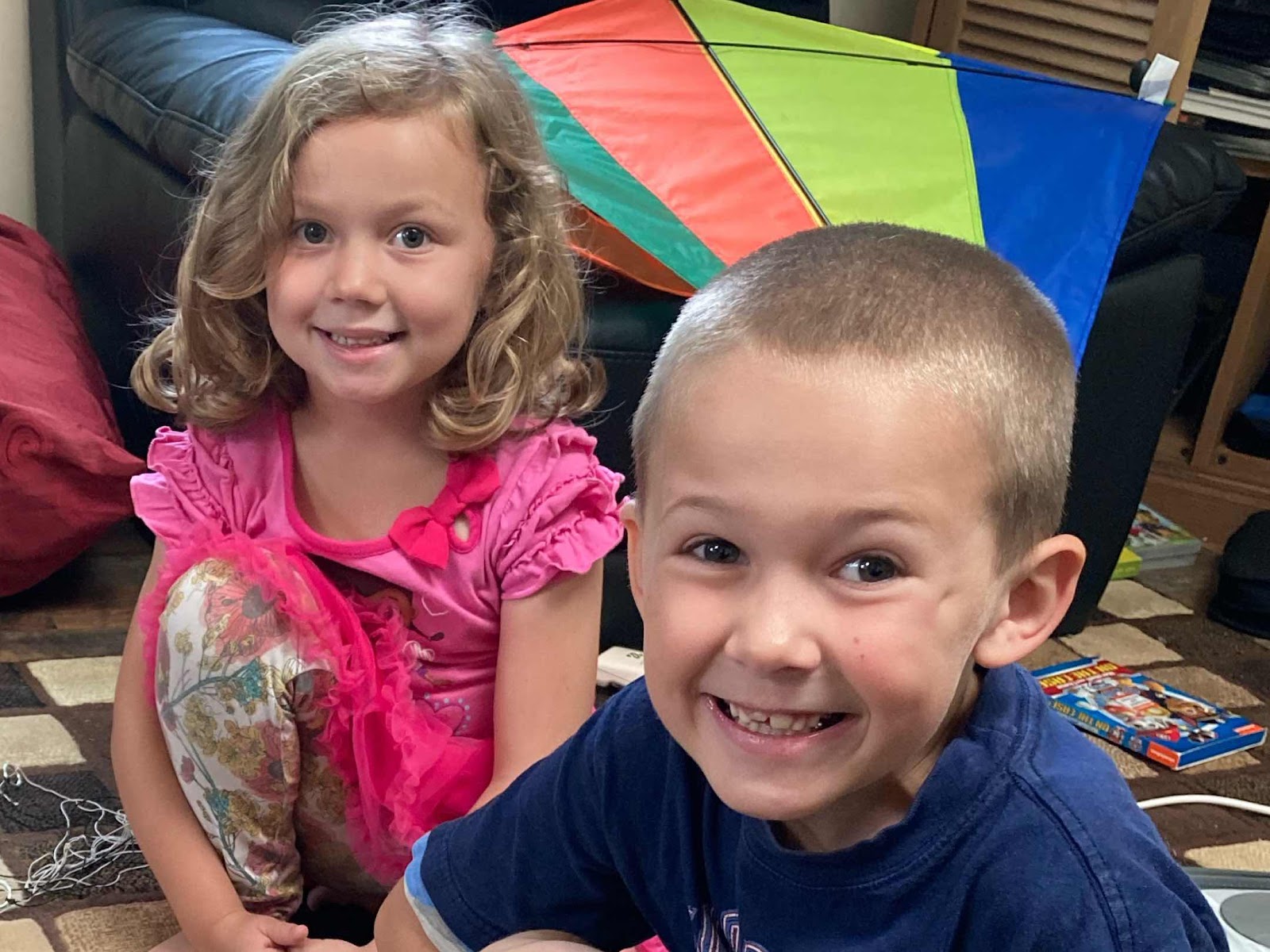 He had great fun….he requested homemade corn dogs….for breakfast!  I denied his request, but I made them for dinner instead. Hahahaha!  He also requested a cake from a local baker.  We checked into getting one, but the baker was not able to fill our request because he had been robbed the previous month…..bummer! So?  We settled for a takeout dessert from a local restaurant.  He didn’t mind too much….😁. He also took his swing with a baseball bat that he got as a birthday gift.  We had some fun in the front field hitting and catching until Gunner got hit with a ball in the forearm.  He cried relentlessly, so we decided to head home and nurse him back to health with his corn dog and dessert meal for dinner…..food works wonders for boys. 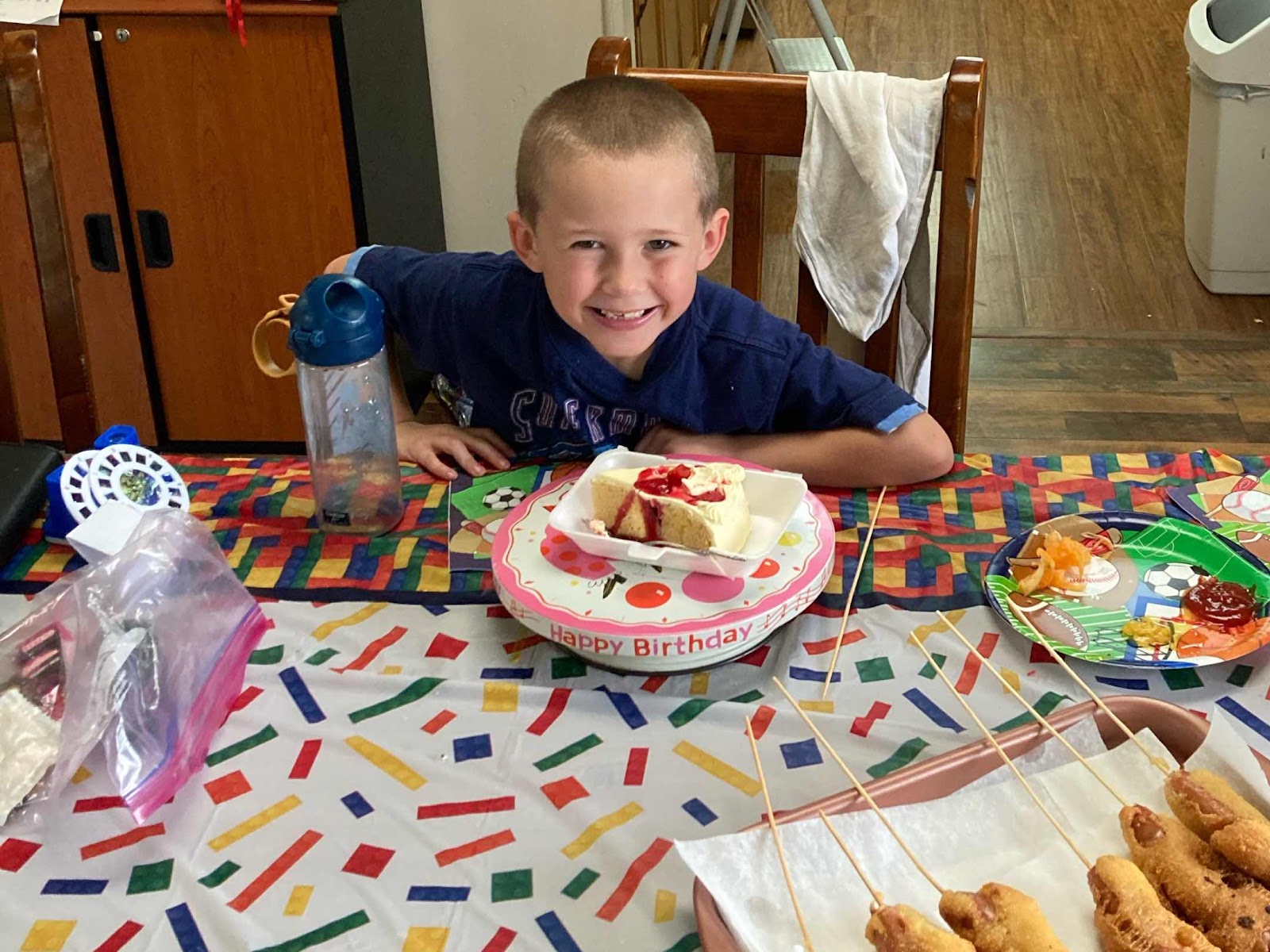 Gunner and his birthday dessert!
Once in awhile we see outrageous and unexpected surprises…here was our find this week…..literally, a real "slug"ger! 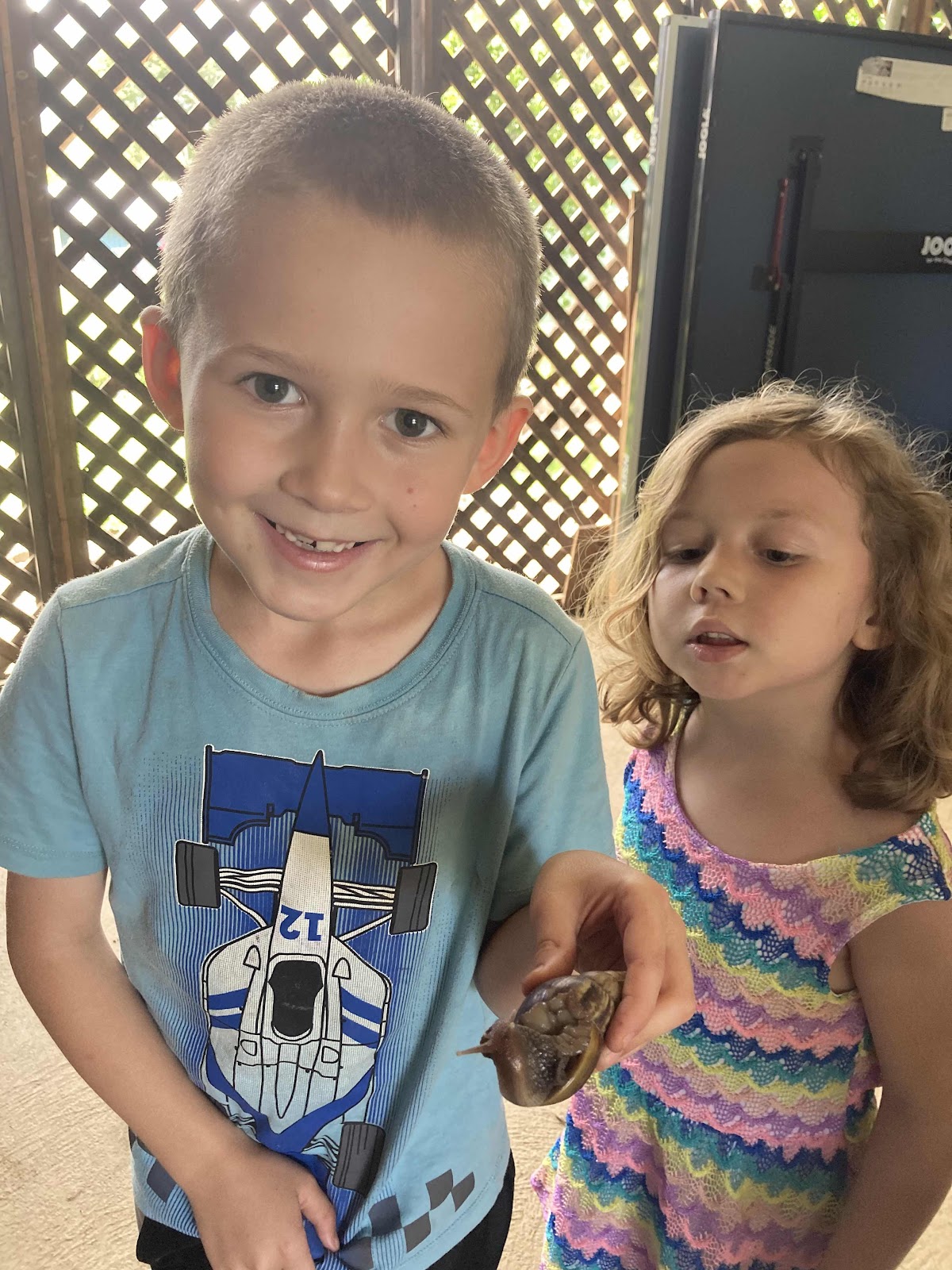 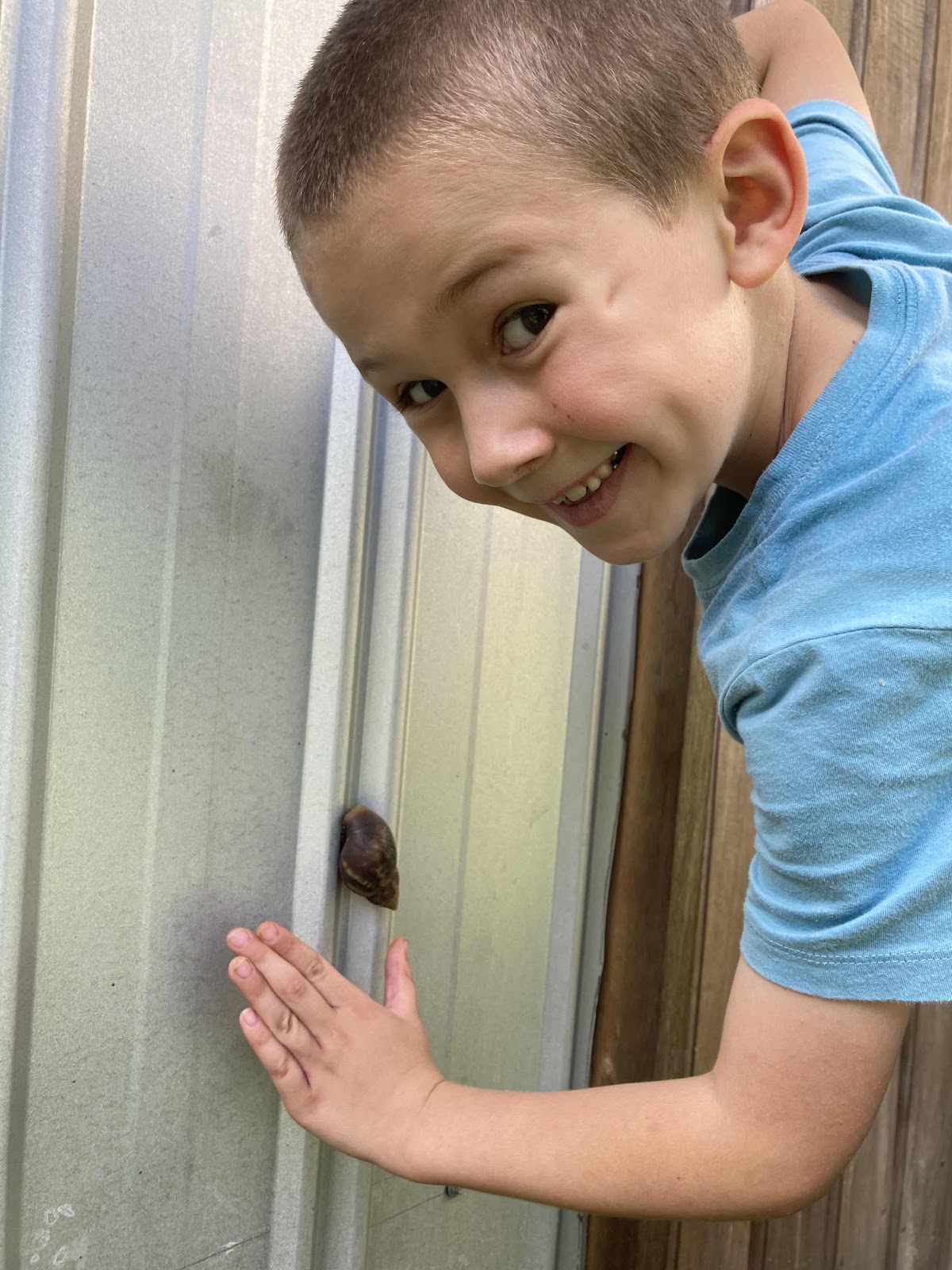 "….but mom! Look at the size of it!" says Gunner.
I’m still in shock.  Moriah wanted to save it for a pet…..I denied her request too…..however, I was thankful she wanted to keep it rather than asking to eat it…hahahaha!
One final thought for today is about the meaning of a "home"run…..we usually think of baseball or softball, right?  However, the "home" I’m running to has nothing to do with playing ball and everything to do with my walk with Jesus!  Our home church pastor says often that our most important thoughts are our God-thoughts.  So?  My God thoughts on the matter are that I want each of you on my team!  I want the bases loaded, I want it to be the first inning (because I would cave under the pressure if it were the last🥴), and I want to sock that ball out of the park! While my story (aka baseball) is flying through the air, I want us all to run with our full might and touch that home plate before the inning is over!  We HAVE time now to bring that dream to fruition….we may not always as our days are each numbered.  My encouragement to you today is to take the chance you have NOW and run in obedience to Jesus!!!  Make it HOME!!!