September 25, 2013
They have these Fonda’s only during Dieciocho aka the Chilean Independence Day.  They go on for about 4-5 day and are located all through the city and country.  They are generally very large at least to us….but there are tons of different culture at these festivals. 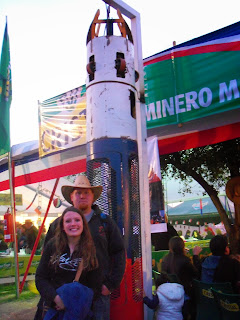 This was the transportation that was used to rescue the Miners in Chile that got trapped underground for several days while the world watched and wondered if they’d make it out alive.  If you remember it was actually built by someone in the States, but the Chileans take great pride in it.  As you can see, it would have been a tight squeeze for me and Brian to be rescued! 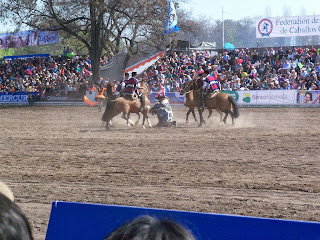 There were many different traditional dance displays that varied greatly in costume and style.  Here, we captured one that included dancing horses!  The horses are very well trained along with their riders, so  it was quite a sight to see! 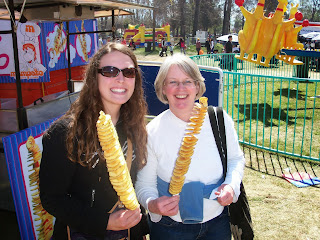 This is me with a friend from the school, Crystal Salsman.  We are holding a spiraled potato that had been deep fried and salted…….let me tell you, it was DELICIOUS!!!!  Brian and I shared one and wondered why we haven’t seen them at the Steele County Free Fair yet……;0) 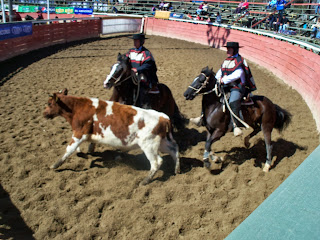 This is a picture of part of a rodeo that we made a slight appearance at.  The point of a Chilean rodeo is to get the cattle to stop…..literally, stand still.  They do that by using like 4-5 men on horses and they all push the cow up against the side of the pen.  The reason you only see 2 riders here is because they were simply warming up and practicing in this smaller arena before the rodeo.  After watching 2 minutes of practice, I (Phyllis) confessed that I had no desire to see the poor cow stand still.  The Chilean rodeo is something I (Brian) am sure Peta would not endorse……but was still very interesting.


I (Brian) am a big fan a meat…..so the scenes below just caught my eye as we walked by.  They had quite the racks of meat being cooked.  This was one of the restaurants that were set up and even though it looked a bit odd, it smelled amazing!! 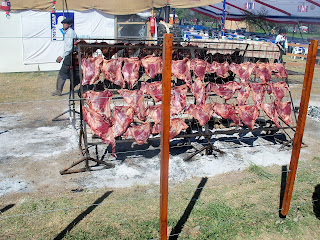 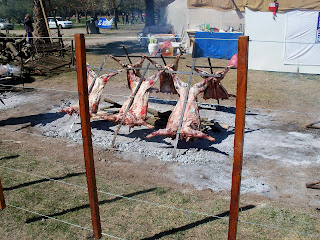 Every branch of the Armed Forces in Chile was represented at this Fonda.  It was quite interesting to see some of the History and even modern equipment they use.  They were anxious to have me (Brian) try on some of their equipment…..I am just a bit bigger than the average Chilean so nothing fit too well and the military stuff was not for sale…..so we had to settle on some pictures!! 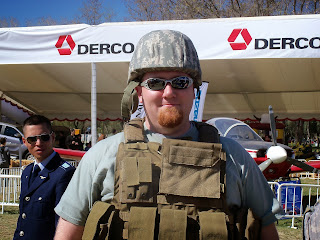 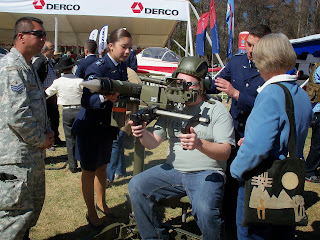 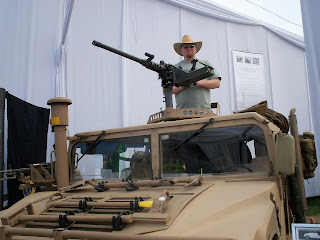 I (Phyllis) insisted that when we saw this huge gun that Brian should crawl inside and get a photograph.  He had to take off his hat and crawl through the jeep to get to it, but the photo was well worth the trouble……Brian looked at home in Chile for the first time!  I was going to try driving (for pose) and get a picture of the two of us, but I was wearing my twirling dress and the first step into the jeep came up to my hip…..it would’ve been very un-ladylike! 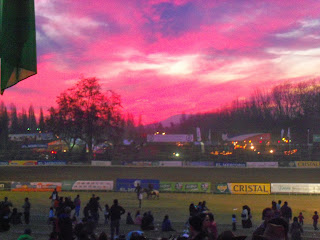 This was  our last view of the park while the sun was setting…….it was breathtaking to say the least and a great way to close out the evening!!