When looking at sports or really any kind of activity the end result is generally what counts.  It is very possible to play an amazing game and choke in the end loosing the game.  If you're anything like me some times we tune in just at the end to see how things turn out.....So? Finishing strong matters.  Life often seems like a game or race where we are doing our best to cross the finish.  We often get lost looking for short cuts and often end up taking harder routes and unfortunately many do not ever finish the race.  As believers we are also running a race.....I think The Bible says it best in Acts 20:24 (NIV) “However, I consider my life worth nothing to me; my only aim is to finish the race and complete the task the Lord Jesus has given me—the task of testifying to the good news of God’s grace.”

That is a very lofty goal, and I must admit, is doesn’t always seem attainable, yet it is.  Today I want to highlight and share a shining example of someone who finishing well!   Wade Sheldon finished his race this last week (May 18, 1933 - September 18, 2020)  in Papua New Guinea.  I first met Wade and his wife (Joyce) along with some other family a few years ago as they were visiting our home church in Waterville, MN.  Wade had been born in Waterville and accepted Jesus Christ as his Savior there.  He was also the father of one of our missionary team members in PNG.   Little did I know the events that would transpire a few years later from that time.

As we fast forward, my family and I were serving as missionaries in PNG. Our colleagues received the call that their mother was ill....Wade's wife of 60+ years passed away.  Wade exemplified the Scripture written above about completing the task he was given.  For a time that was working jobs, raising kids, and caring for his wife until the end....but God was not finished with him.  Wade made it his mission to serve God with the best of his abilities.  His mind was very sharp but his body was now in the mid-80's and was struggling.  He needed help but his focus of serving God did not change.  He was committed to seeing the Great Commission be fulfilled by his daughter and son in-law in PNG and did not want to have them leave the mission field to help care for him....little did he know the plans God had for him!

A discussion was had among our mission team who all have the same belief that it is our responsibility and privilege to care for our parents.  At that point a God-sized plan was set in motion.....Wade moved to PNG.  My specific role in that was to work with a group of Papua New Guineans to make a living space for Wade in PNG that could accommodate him with his limitations.  You can look back to this blog to see pictures of that project House Remodel.

We had the privilege to spend a year and a half with Wade living in PNG.  While he did not have the mobility to travel very far, he had a very pointed ministry of prayer on the front lines as he was getting requests all day in real time.  He interacted with lots of Papua New Guineans everyday and his testimony radiated....He finished the task to testify to God's grace! We had the privilege to watch his celebration of life (funeral) on earth...while we are currently across the globe...the impact couldn’t be missed.  Hundreds of people arrived at his house each day to mourn his passing.  On the final day of his funeral around 1,000 Papua New Guineans showed up to honor the life of Wade.  To God be the glory there was even a couple people who gave their life to Jesus Christ during the funeral and countless more seeds where planted!!!

We often think once we get a certain age...we have to retire...live the easy life....while that may be the human desire, God has a different plan and purpose for our Whole life, if we are willing.  I did not get tuned in to Wade's race until near the end, but I can tell you, he finished well!!!!....and not because he got lucky at the end.  He worked hard the whole race, He served the Lord with every opportunity, and even when God asked him to become a missionary in Papua New Guinea at 86 years old, he took up the task with the faith of a seasoned pro! 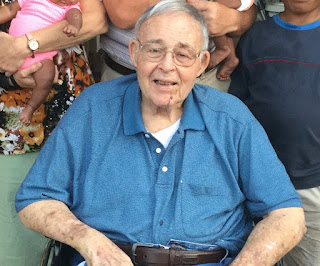