October 09, 2013
Brian heard some of us teachers talking that the end of the grading quarter was coming up, and we had LOTS to do.  So?  He picked a Saturday and set aside a four hour block time to work on grades and lesson plans......but that's not the best part......he THEN offered to feed us all breakfast!  Others pitched in for breakfast too, but Brian decided to be in charge of the main course.....french toast! 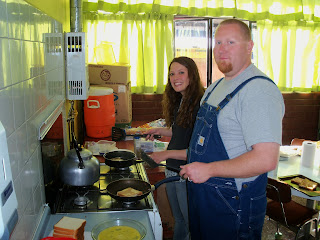 Here are Brian and I cooking french toast in the high school kitchen. 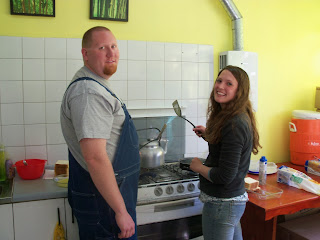 From another angle, we look a little less official, but we were working in between photos!


After our grading/planning sprint, there was a birthday party here at the school for one of the missionary families.  To close out the evening, we had a bonfire on the field out back.  It takes some time to actually get approved to have a fire.....the people often burn stuff in the street for protest, but to have a friendly "legal" bonfire took some real effort.  To celebrate we had Chilean s'mores......(they don't have graham crackers here, so we improvised).....and enjoyed fellowship with the other staff.  It was a blessed day indeed!﻿